Installation of an ice-maker with a production capacity of 10 tons in 24 hours with refrigerant R717 in the Wessamat technical centre.

Construction of a technical centre at the company site. There, industrial ice productions of hollow cone ice, square ice and tube ice including conveyor technology, storage and packaging will be shown live. Potential customers can thus grasp and "touch" the ice.

First installations of industrial ice makers with square ice cubes and a production capacity of 1,600 kg in 24 hours. 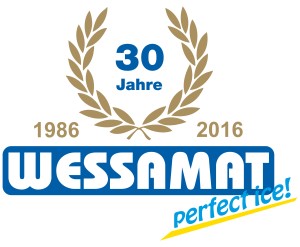 Wessamat is awarded 3rd place in the category machines/equipment for its choice as super partner by the GGKA Association among 40 participants Extension of the Cube-Line product line with the IC 135 model for the production of square ice cubes and genuine crushed ice Development and market launch of an innovative and high-performance composite concept for the energy-efficient production of square ice cubes for commercial and industrial applications.

Technical and process-oriented conception and realisation of industrial ice production including ice storage as well as transport and filling systems for a new ice plant in the fish industry.

Extension of the product range by the product group CUBE-Line (machines for square ice cubes).

Successful conclusion of company succession with the appointment of Michael Jäger as the new Managing Director.

Expansion of the range to include the scale ice maker product group For the second time in a row, Wessamat is awarded first place as a Super Partner in the machines / equipment category by the members of the GGKA (German Professional Association for Gastronomy and Industrial Kitchen Equipment)

Expansion of the range to include the ice flaker product group

Visit us also at:

We use cookies on our website. Some of them are essential for the operation of the site, while others help us to improve this site and the user experience (tracking cookies). You can decide for yourself whether you want to allow cookies or not. Please note that if you reject them, you may not be able to use all the functionalities of the site.